Green vs Red: What's the Difference?

At Viridian, our mission is to be at the forefront of weapon technology. That’s why in 2006, we created the world’s first green laser sight for pistols and initiated a new era of upgraded accuracy. It may not sound like a big deal, but the color of your laser can have a major effect on accuracy.
There are two primary colors when discussing firearm laser sights – red or green. To understand the difference, we must first understand what a laser is and how we perceive color in the natural world. The word LASER is an acronym for Light Amplification by Stimulated Emission of Radiation. This means that the laser both produces and amplifies light, by means of stimulated emission of electromagnetic radiation. The process essentially concentrates one wavelength, or color, of light. What the human eye sees as “color” is electromagnetic radiation ranging from wavelengths of 390 nanometers (violet) to 700 nanometers (red). Wavelengths under 390 nanometers are considered ultraviolet light and wavelengths over 700 nanometers are considered infrared light, both of which are invisible to the human eye. 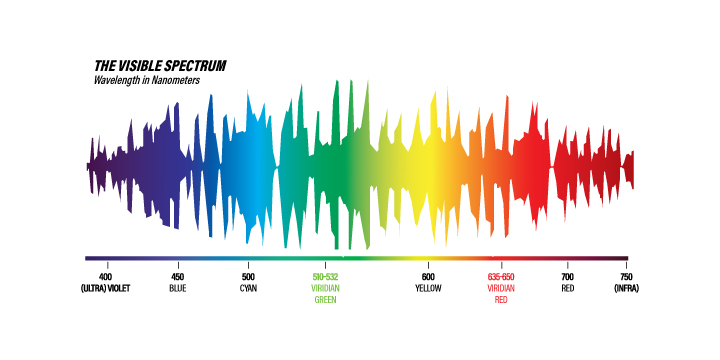 The real-world difference between red and green laser sights is their visibility in the daylight. Green light is notably easier to distinguish than red light because it triggers a much higher number of receptor cells in the human eye. Viridian Green Lasers utilize a 510-532nm wavelength range near the center of the visible spectrum, creating an optimum targeting dot that's up to 50x brighter than the conventional red, visible at all times, under all conditions, and effective at distances no ordinary laser can achieve indoors or outdoors. This bright-light performance is a very important distinction to make when choosing what color site is right for you. If you are not particularly concerned with laser visibility in the daylight and looking to save some money, a red laser site would be a good choice. If you are interested in using your laser sight in all lighting conditions, you should choose a green laser. Whatever your preference, Viridian has a diverse range of affordable options to fit your needs.
Recently Viewed
No recently views items
Clear All