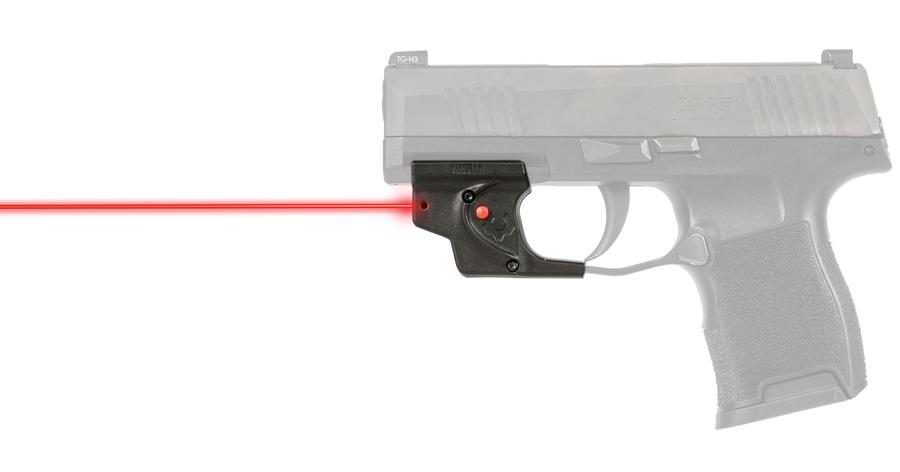 MINNEAPOLIS, Minn. – December 13, 2018 – Viridian Weapon Technologies has announced the availability of two new weapon-mounted accessories for the Sig Sauer® P365. The REACTOR® R5 Gen 2 Green Laser Sight and the E-SERIES™ Red Laser Sight are each designed to fit the P365 and are currently available for sale in stores and online. With the holiday season now underway, one of these new weapon-mounted accessories makes the perfect gift for a friend or loved one who owns a P365 pistol.

“Our E-SERIES and REACTOR Gen 2 lasers are designed from the ground up for concealed carry,” said Viridian President and CEO Brian Hedeen. “When combined with the Sig Sauer P365, you’ve got a compact pairing that offers the reliability and fast target acquisition needed for personal protection.”

The REACTOR R5 Gen 2 comes standard with an inside-the-waistband (IWB) holster fitted for the Sig Sauer P365. Each REACTOR product and accompanying IWB holster is equipped with Viridian’s patented INSTANT-ON® technology, ensuring that the laser/light activates automatically when the gun is drawn.

The strongest green laser on the market, Viridian’s R5 Gen 2 Green Laser Sight features triple battery life, with over three hours of laser use in constant mode and up to six hours in pulse mode. The effective range of the laser is up to 100 yards during daylight and out to two miles at night. It has both windage and elevation adjustments for sighting in and is backed by Viridian’s industry leading seven-year warranty. The MSRP for the REACTOR R5 Gen 2 Green Laser for the Sig Sauer P365 is $239.00.  The REACTOR Series is also available with a red laser, which has an MSRP of $149.00.

Viridian’s E-SERIES laser sight is made for the everyday concealed carry owner who demands the most powerful red laser allowed in the United States. Delivering rapid target acquisition when it’s needed most, the E-SERIES is an invaluable component to any concealed carry setup.

The E-SERIES red laser sight for the Sig Sauer P365 weighs just .78 ounces and is made of a high-strength theromolded polymer. It offers over six hours of constant battery life and has an effective target range of up to 25 yards during daylight. Activation of the laser is made intuitive and easy, thanks to an ambidextrous on/off switch. The E-SERIES laser has both windage and elevation adjustments for sighting in and is backed by Viridian’s industry leading seven-year warranty. The MSRP for the E-SERIES Red Laser for the Sig Sauer P365 is $132.00.

The Sig Sauer P365 is a compact, striker-fired 9mm pistol with an impressive 10+1 capacity. It’s built on a stainless-steel frame and is rated for +P ammunition. Weighing just 17.8 ounces, the P365 is an ideal option for concealed carry.

Information on these new options for the P365 and all other lasers, lights, cameras and accessories is available at ViridianWeaponTech.com.