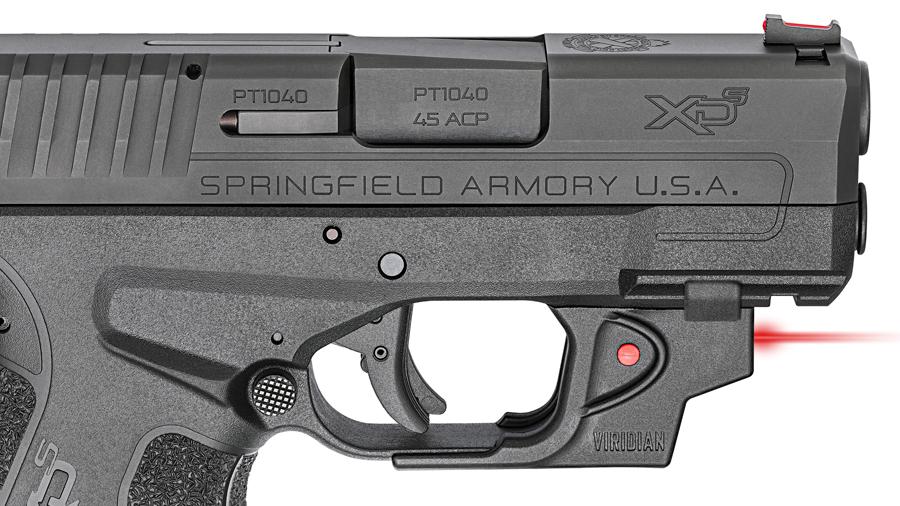 Viridian's E Series laser sight is made for the everyday conceal and carry owner who demands the most powerful red laser allowed in the United States. Delivering rapid target acquisition when it’s needed most, the E Series is an invaluable component to any concealed carry setup.

The XD-S Mod. 2 chambered in 45 Auto features a slim, single-stack frame just 6.5 inches long and under five inches high with a grip that is a mere .975 inches wide. These dimensions combined with a premium front and rear sight and an enhanced trigger advance the pistol’s "point and shoot" ergonomics. Additional upgrades and a six-round capacity make it a premier concealed carry option.

"Launching this new, updated firearm and having quality laser and light options right away is a big win for our customers and consumers," said Springfield Armory Vice President of Marketing Steve Kramer. "The XD-S Mod. 2 has been refined and improved exclusively for concealed carry. Partnering with Viridian before launch allowed us to go to market as a complete personal defense solution from day 1."

The REACTOR R5 green laser is up to 50 times brighter than red, making it the ultimate targeting system for concealed carry pistols. The REACTOR R5-R, the brightest red laser on the market, offers similar performance for the budget-conscious gun owner. Each REACTOR laser includes a microfiber IWB holster that is equipped with Viridian’s patented INSTANT-ON® technology, ensuring that the laser activates automatically when the gun is drawn.

"Viridian is proud to offer a variety of powerful sighting solutions that are completely customized for the new XD-S Mod.2 pistol," said Viridian President and CEO Brian Hedeen. "We worked closely with Springfield to make sure our gun-specific lasers were available as soon as the gun was released. Now customers can purchase a compatible Viridian laser the same day they buy the XD-S Mod.2."

A full list of E Series and REACTOR laser sights designed to fit popular gun models is available at ViridianWeaponTech.com.

Headquartered in Minneapolis, Minnesota, Viridian Weapon Technologies is devoted to applying cutting-edge technology to design compact, powerful self-defense products for the civilian, military and law enforcement markets. Viridian® is the leader in weapon-mounted technology and responsible for a number of firearm innovations including green and red laser sights, LED weapon-mounted illuminators and several shooting accessories including the Tacloc® Holsters. Viridian products are designed and built in the USA. More information is available at ViridianWeaponTech.com.